During a recent cell phone exam, I encountered an interesting dilemma. When the phone was powered on it required a SIM PIN. Making things worse there was no indication who the carrier was, and the owner of the phone was unwilling to provide the code or any information. The investigator needed information from the phone as quickly as possible.

OK- so the SIM card was locked, not the phone. Some phones, including the one in question, stored a considerable amount of the information within the phone’s memory not just the SIM Card. So I decided to put another SIM Card into the phone and I powered up and had access to the handset’s data.

However, there is a catch. When you acquire the data from the phone you need to use a blank SIM (No stored data). (Note: You should be able to find a good SIM Card from your test handsets-MORE). In this case, I used a SIM from a Nextel that was a replacement (new) phone with the SIM not having been encoded. With the unlocked SIM, there’s nothing to stop you from acquiring the data within the phone.

The above screenshots shows how I used a phone which was originally a T-Mobile phone, and an empty Nextel SIM card. Notice that Nextel comes up on the main screen as function of the SIM. However, the phonebook and call histories were contained within the phone’s memory.

I also noticed the phone’s identity with it’s carrier is determined by the SIM. You might get lucky and find a phone entry for voice mail, which is often the number of the phone itself. One other possibility is an entry in the phonebook which is labeled “My Number.” Regardless, this is a simple way of bypassing the SIM lock to get at the information you need.


Submitted by Richard McKee
Posted by ForensicZone at 8:32 PM No comments: 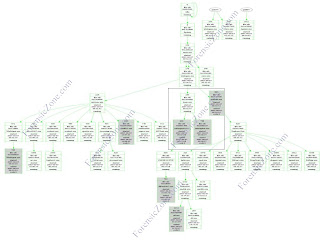 Posted by ForensicZone at 7:43 PM No comments:

What does PTFinder Do ?
PTFinder searches a memory dump of a system running Microsoft Windows for traces of processes and threads. Some functional checks are also applied. (According to Andreas Schuster)
Andreas Schuster http://computer.forensikblog.de/en/2006/

What Memory Dumps are Supported ?
DD dumps for example dd bs=4096 if=\\.\Device\Physicalmemory of=dumpfile
By pausing a VMWARE Session and using the VMSS File
In-Vivo using Sysinternal's LiveKD and a debugger
Post-Mortem as described in Microsoft Knowledge Base Article no.244139

Why do I need other Programs to make PTFinder to Work ?
PTFinder is written in Perl Script– so you need a Perl complier.
PTFinder creates a DOT file which can be used to create a graphic of the output.
See the DETAILED INSTRUCTIONS for more information.

Where can I get a Good Test Dump File?
http://www.dfrws.org/2005/challenge/index.html

Why did you Created PTFinderFE?
Well...I was placing the dump file into the PTFinder.PL Path which could have been eliminated by typing in the directory location of the dump file for every dump file I wanted examine( c:\case 05-022\Live Acq\234566-1). A DOT File was created which you have to copy into the Grapvhiz Executable folder, type in the command line and then copy all your outputs to my forensic directory. On top of all that if you used the "Program Files" Directory the command lines needed quotes(""). Since I use PTFinder a lot I had to make it more user friendly for me.

What is PTFinderFE?
A Microsoft Visual Basic Program that creates a batch file to do your leg work between PTFinder, Graphviz and your working forensic folder.

Why is PTFinder so Important?
Live Acquisition is the current trend in computer forensics. A lot of forensic investigators are doing live acquisitions but had nothing to effectively examine the output. Thanks to Andreas Schuster we have one more tool in the toolbox.
Back to Top
Posted by ForensicZone at 7:35 PM No comments:

Acquisition – A process by which digital evidence is duplicated, copied, or imaged. (NIST)

Analysis – The examination of acquired data for its significance and probative value to the case. (NIST)

Authentication Mechanism – Hardware or software-based mechanisms that force users to prove their identity before accessing data on a device. (NIST)

Bluetooth – A wireless protocol that allows two Bluetooth enabled devices to communicate with each other within a short distance (e.g., 30 ft.). (NIST)

Chain of Custody – A process that tracks the movement of evidence through its collection, safeguarding, and analysis lifecycle by documenting each person who handled the evidence, the date/time it was collected or transferred, and the purpose for the transfer. (NIST)

Code Division Multiple Access (CDMA) – A spread spectrum technology for cellular networks based on the Interim Standard-95 (IS-95) from the Telecommunications Industry Association (TIA). (NIST)

Compressed File – A file reduced in size through the application of a compression algorithm, commonly performed to save disk space. The act of compressing a file will make it unreadable to most programs until the file is uncompressed. Most common compression utilities are PKZIP and WinZip with an extension of .zip. (NIST)

Cradle – A docking station, which creates an interface between a user’s PC and PDA, and enables communication and battery recharging. (NIST)

Cyclical Redundancy Check – A method to ensure data has not been altered after being sent through a communication channel. (NIST)

Deleted File – A file that has been logically, but not necessarily physically, erased from the operating system, perhaps to eliminate potentially incriminating evidence. Deleting files does not always necessarily eliminate the possibility of recovering all or part of the original data. (NIST)

Electromagnetic Interference – An electromagnetic disturbance that interrupts, obstructs, or otherwise degrades or limits the effective performance of electronics/electrical equipment. (NIST)

Electronic Evidence – Information and data of investigative value that is stored on or transmitted by an electronic device. (NIST)

Encryption – Any procedure used in cryptography to convert plain text into cipher text to prevent anyone but the intended recipient from reading that data. (NIST)

Examination – A technical review that makes the evidence visible and suitable for analysis; tests performed on the evidence to determine the presence or absence of specific data. (NIST)

File Name Anomaly – A mismatch between the internal file header and it external extension; a file name inconsistent with the content of the file (e.g., renaming a graphics file with a non-graphics extension). (NIST)

File System – A software mechanism that defines the way that files are named, stored, organized, and accessed on logical volumes of partitioned memory. (NIST)

Forensic Copy – An accurate bit-for-bit reproduction of the information contained on an electronic device or associated media, whose validity and integrity has been verified using an accepted algorithm. (NIST)

Forbidden PLMNs – A list of Public Land Mobile Networks (PLMNs) maintained on the SIM that the phone cannot automatically contact, usually because service was declined by a foreign provider. (NIST)

Hashing – The process of using a mathematical algorithm against data to produce a numeric value that is representative of that data. (NIST)

Integrated Circuit Card ID (ICCID) – The unique serial number assigned to, maintained within, and usually imprinted on the (U)SIM. (NIST)

Image – An exact bit-stream copy of all electronic data on a device, performed in a manner that ensures the information is not altered. (NIST)

Instant Messaging (IM) – A facility for exchanging messages in real-time with other people over the Internet and tracking the progress of the conversation. (NIST)

International Mobile Subscriber Identity (IMSI) – A unique number associated with every GSM mobile phone subscriber, which is maintained on a (U)SIM. (NIST)

Location Information (LOCI) – The Location Area Identifier (LAI) of the phone’s current location, continuously maintained on the SIM when the phone is active and saved whenever the phone is turned off. (NIST)

Password Protected – The ability to protect a file using a password access control, protecting the data contents from being viewed with the appropriate viewer unless the proper password is entered. Guidelines on Cell Phone Forensics (NIST)

Personal Digital Assistant (PDA) – A handheld computer that serves as a tool for reading and conveying documents, electronic mail, and other electronic media over a communications link, and for organizing personal information, such as a name-and-address database, a to-do list, and an appointment calendar. (NIST)

Personal Information Management (PIM) Applications – A core set of applications that provide the electronic equivalents of such items as an agenda, address book, notepad, and reminder list. (NIST)

Personal Information Management (PIM) Data – The set of data types such as contacts, calendar entries, phonebook entries, notes, memos, and reminders maintained on a device, which may be synchronized with a personal computer. (NIST)

Personal Identification Number - is a secret shared between a user and a system that can be used to authenticate the user to the system. PINs are often 4-digit numbers in the range 0000-9999 (WIKI)

Personal Unlocking Code (PUC) If the wrong PIN is typed in more than three times, either the SIM Card orthe device or both become permanently locked. They can be reverted to their original unlocked state, however, by entering a PUC, but if the wrong PUC is entered ten times in a row, the device will become permanently blocked and unrecoverable, requiring a new SIM card. (WIKI)

Short Message Service (SMS) – a cellular network facility that allows users to send and receive text messages of up to 160 alphanumeric characters on their handset. (NIST)

Synchronization Protocols – Protocols that allow users to view, modify, and transfer/update data between a cell phone and personal computer. (NIST)

USIM (UMTS Subscriber Identity Module) – A module similar to the SIM in GSM/GPRS networks, but with additional capabilities suited to 3G networks. (NIST)

Volatile Memory – Memory that loses its content when power is turned off or lost. (NIST)

Wireless Application Protocol (WAP) – A standard that defines the way in which Internet communications and other advanced services are provided on wireless mobile devices. (NIST)

Write-Blocker – A device that allows investigators to examine media while preventing data writes from occurring on the subject media. (NIST)

Write Protection – Hardware or software methods of preventing data from being written to a disk or other medium. (NIST)

Extensible HyperText Markup Language (XHTML) – A unifying standard that brings the benefits of XML to those of HTML. (NIST)

“Carving” out pictures from a Handset (FTK)

If you have Encase you want to follow this link - Carving” out pictures from a Handset (Encase) for the following two reasons.

1. FTK (Versions 1.61a and 1.62.1) do not seem to be adding sub-case items correctly
2. Encase, after you set up and run the correct search parameters, will automatically bookmark the “carved images”.

The first thing I want to clarify is the definition of “Carve” in this page. So you, or another investigator, manually review a handset using it’s internal operating system and determine the picture you need is no longer on the handset. Sometimes images might not be accessible to the user but there might be images still residing in the logical memory of the handset.

I know what you are thinking: Open up a Case in FTK and automatically CARVE for images in the phone files. In my experience this answer is half right. I have not had much luck with FTK’S internal carving feature with logical phone files (This is not a rip on FTK it is just my experience. FTK is one of my favorite programs).

First you have to obtain a dump of the handset’s content.

If you used BITPIM (Root.zip) then you are ready to start ENCASE

If you used PARABEN DEVICE SEIZURE then use Paraben's Report Feature. And choose to create a HTML Report and include all items from the case. Paraben's report will save the files needed for the HTML Report in a folder called
Posted by ForensicZone at 10:49 PM No comments: