XPSP3 - How this is going to affect RAM Analysis?

Well to sum up XPSP3 (for RAM Analysis) I’d say the prognosis is great.

The key offsets that I look for in the EPROCESS (Page Directory Base, Create Time Low, Create Time High, Exit Time Low, Exit Time High, PID, Image File Name) appear to be the same as XPSP2. The Kernel Program (NTOSKRNL.exe) I use to gauge the OS Version of the RAM is also similar to previous versions.

I tried to use Windbg (v6.8.0004.0) to confirm the EPROCESS Structure but I was unable to find the new Symbols at Microsoft.

The above GREP was run against a VMEM file running XPSP3 and returned the following:

The numeration is added below:
*** Fixed Thanks to Andreas Schuster****•


The following is a list of the EPROCESS Information for all current versions of Windows. The XPSP3 entries are tentative and identified from hex analysis of a RAM Acquisition and should be confirmed using WinDbg as soon as possible. PTFinder and PTfinderFE work on XPSP3 just use the XPSP2 option. 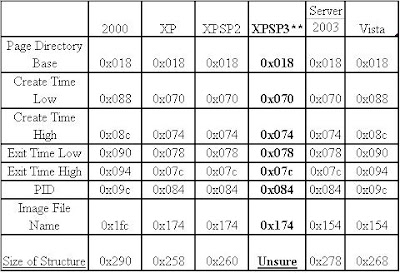 Posted by ForensicZone at 8:43 PM 2 comments:

I am presenting a two-day course on RAM Acquisition and RAM Analysis at the International Association of Computer Investigative Specialists (IACIS) 2008 CFCE Course between April 28, 2008 through May 9, 2008 in Orlando, Florida.

My sponsor is Digital Intelligence.


The following is a quick synopsis of the training:

RAM Analysis – Vista and Beyond
Everything run on a computer passes through the RAM at one time or another. The trick is being able to identify data found in a RAM capture and relate it back to the item that originally created it. This two day training session includes a very "hands-on" lab to train on different tools and using various methods for collecting RAM from a running machine.

For more information go to the IACIS Website
Posted by ForensicZone at 10:45 PM No comments:

Posted by ForensicZone at 9:36 PM No comments:

• You Know What a Hard Drive Molex Cable Looks Like…

(Easiest Setup – the Computer Has a and …)

Posted by ForensicZone at 9:34 PM No comments: 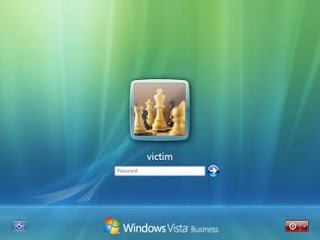 Scenario#1 You come up to a desktop computer that you have legal authority to forensically analyze. The computer is powered up but sitting at the Windows Login Screen. No chance to get an image of the RAM so you pull the plug from the back of the machine and retreat to the lab. At the lab you discover that the hard drive has been encrypted with BITLOCKER. What could you have done different at the scene to possibly obtain more information from the computer prior to shut down?


Scenario#2 A desktop computer running is on and logged in with no apparent encryption. You attempt to dd the RAM (with any tool of your choice) to no avail, why? Because no matter the tool you use it requires an Administrator Username and Password that you do not have. So your choice is simple just pull the cord from the back of the case in frustration.

• “Although most computers automatically zero main memory upon rebooting- many do not. This is generally independent of the OS”

• “Motherboards fueled by Intel CPUs tend to have BIOS settings that clear main memory upon restart, but there is no requirement for this to happen”

I haven’t tried this method with any laptops (yet) .

Perform the “Guillotine Method” Ram Capture at Your Own Risk.

Not Responsible for any damage, problems or loss.

Thanks to Matt P. for his Help on This!!!

Posted by ForensicZone at 9:26 PM 9 comments: